The values and perceptions of  the modern world are not the same as those of the times when the Perrault, Anderson and the Brothers Grimm penned down their stories. Today, their stories seem biased, bigoted and even regressive. Humans have learned to shake off the elaborate structure of pigeon-holes that were wordlessly in place for many centuries.

T. F. Carthick has attempted to re-write a few of the most popular fairy tales. He has turn the tales on their head. The stories have been told within the frame-work of a brand new value system. At times the stories are told through the point of view of another character. The result is immensely refreshing and gripping, making for delightful reading.

The very popular story of Cinderella was narrated by a wise old mouse who disbelieves the young mouse who claims to have been Cinderella’s royal steed for her magical evening. The wise one’s pithy remarks about the self-centeredness of humans make one stop short. He laments the propensity of all living beings to indulge in the delusions of their past glory.

Many lives, especially those of men, have been ruined by the constant longing to return to that one moment of grandeur from the past that one can never revisit.

Carthik’s retelling of the fairy tales is liberally peppered with his tongue-in-cheek satire. Guised as humor, his reflextions are at once evocative, clever and endearing. For all the humor however, his observations are worthy of attention. They would speak much, were you to pay heed.

I have seen the best of times. I have seen the worst of times. Various hues of men have come. And have gone. But I continue to live and learn. So many memories lie buried deep within my heart going all the way back to the time when I came into existence. From the collective consciousness of a jungle, my individual consciousness was eked out. The trees were cut and ramparts erected. Houses were built and people came to live within me, entrusting me with their lives. I was given a soul – the soul of the people who lived within me. I was no longer a nameless formless swathe of wilderness – a small part of the vast jungle. I became my own person with my own name and form. I became Hamelin.

These seven ‘Unfairy Tales’ are not only read-worthy because they turn familiar stories around completely. They also make very interesting reads because Carthink’s has made the stories uniquely his own, imbuing them with his own personality.

To be able to imprint a new voice on a narrative on which the old voice was so deeply entrenched, was not a mean feat. Only an author with a powerful pen could have done it. For this, Carthick deserves unrestrained kudos! Well done Carthick! Very well done indeed! 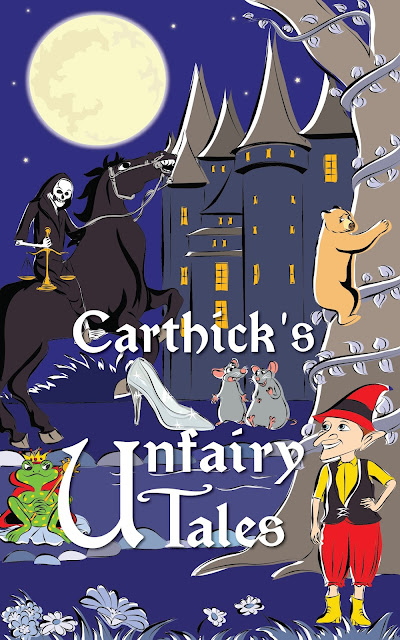 Blurb
A damsel in distress. An evil dragon. A concerned father seeking a savior to rescue his daughter. A hero galloping off to the rescue – a knight in shining armor. Now THAT is stuff of fairy tales.
But what if the father’s real concern is for the dragon’s hoard; What if the damsel’s reason of distress is the marriage proposal by her pompous and vicious savior; and what if the story is told by the horse who bears not only the overweight knight but also his heavy, shining armor all the way to the dragon’s lair and back, facing certain death in the process?

What if there was more – much more – to all your favourite fairy tales than met the eye?

This book chronicles not one but seven such unfairy tales – tales told by undead horsemen and living cities. Tales of mistreated hobgoblins and misunderstood magicians. Tales of disagreeable frogs and distressed rats and bears baring their souls. Once you read these stories, you will never be able to look at a fairy tale the same way ever again.
Read an excerpt


This was wrong at many levels. The mayor’s despair and eagerness to solve the problem was understandable. But from what I have seen, no human problems come with quick fixes. Haste seldom helps. One requires patience to get to the depth of a problem and attack it at its root. A holistic solution does take a lot of time and effort but the benefits are long-lasting. Quick fixes, on the other hand, end up aggravating the situation. Take this situation of the rats itself, for instance. While the mayor may not have realized it, the fact was that the people of the town had brought this upon themselves. A few years earlier, people had complained of snakes. There were just a few of these reptiles, but still the people had complained incessantly. So, snake-catchers had been summoned to exterminate the snakes. Then, a few months’ later, stray dogs had become the object of the people’s ire.
“They keep barking all night. They just don’t let us sleep,” they had complained.
And they began to make a big fuss of how dogs were a public menace and exaggerated stories of dogs attacking humans started spreading, till finally the town council had to yield. Dog-catchers were commissioned and the dogs were done away with. With the elimination of their natural predators, wasn’t it natural that rats should multiply? But people just don’t realize these kinds of things. That is how people have been all the time. They wanted quick-fix solutions to all their problems then, and they want quick-fix solutions to all their problems now. They never learn.
Also, I suppose the mayor probably thought he would never be called upon to follow through upon his promise. So, he promised a grand reward just to appear to be doing something. That is another folly of humans, especially the leaders. They care more about perception than actually getting things done. And often initiatives undertaken to manage perceptions end up doing more harm than good. 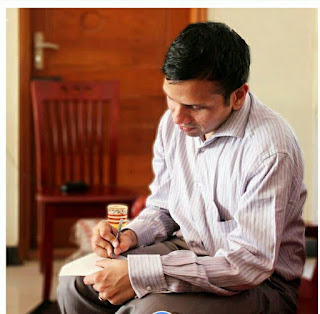 T F Carthick is a Bangalore-based writer and blogger who has been blogging since 2008. He is an avid reader of Children’s Fiction, Science-fiction and Fantasy. Enid Blyton, J K Rowling, Isaac Asimov, Frank Herbert, Neil Gaiman and Douglas Adams are some of his favorite authors. His paranormal thriller ‘Bellary’ was one of the three stories in the book Sirens Spell Danger, published in 2013. Six of his stories have featured in multi-author anthologies and literary magazines. He has written over 50 short stories, many of which can be read for free on http://www.karthikl.com.
He is an Engineer and MBA from India’s premier institutes IIT, Madras and IIM, Ahmedabad and currently works as an Analytics and Artificial Intelligence Consultant at one of the world’s leading Consulting Firms.
You can stalk him @


This Tour is Hosted by

We Promote So That You Can Write