The Shastri in the name of India’s second Prime Minister is not his surname. It is a scholastic title he earned from Kashi Vidyapeeth during his graduate studies. He never used his real surname (Srivastava) because he was completely against the caste system, a major principle of the Gandhian movement.

Shastriji was an idealist. In a way it is not surprising, for he grew up in idealistic times. He had giants of spirit to inspire and influence him. The whole country was melting in a purifying cauldron in which all baser impulses were destroyed to leave just the pure gold of virtue desperately needed to rebuild a nation. Shastriji was a pure soul who was transparent and guileless. He stands apart from his contemporaries because the brilliant sheen of his integrity was never dulled by the rigors of even the highest public office.

Shastriji was a common man. He was very unpretentious and down-to-earth.  He was diminutive, soft-spoken and mild-mannered. What made him spectacular was his impeccable integrity.

When Shastriji was in jail during the independence struggle, he protested when his wife smuggled two mangoes to him in the Faizabad prison. He was angry because it was illegal for prisoners to have anything other than jail food.

In 1963, on the day when he was dropped from the cabinet, he was sitting in his home in the dark, without a light. When asked why, he said that since he was no longer a minister he would have to manage his expenses on his salary as a MP which was barely enough. As a minister he hadn’t earned enough to save for a rainy day.

After he became the Prime Minister, his son once took his official car for a joy ride. Shastriji made sure that he paid for the distance the car was run that day.

My father tells me of the time when he and Shastriji’s son were in Bhopal bidding for a supply order of the state electricity board. My father was sure Shastriji’s son would be given the order- and said so to Shastriji’s son. To my father’s surprise, Shastriji’s son shook his head and said that he was at par with all other bidders. His father Shastriji would never allow any favor to his son. Shastriji was the Prime Minister of India at that time!

In September 1956, he was serving as the Railway Minister. He offered his resignation after a railway accident at Mahbubnagar that led to 112 deaths. However, Nehru did not accept his resignation. Three months later, he resigned accepting moral and constitutional responsibility for a railway accident at Ariyalur in Tamil Nadu that resulted in 144 deaths. While speaking in Parliament on the incident, Nehru stated that he was accepting the resignation because it would set an example in constitutional propriety and not because Shastriji was in any way responsible for the accident.

After Nehru’s death in ‘64, Shastriji  became the second Prime Minister of India on 9th June 1964.

Shastriji’s premiership began at a time when India was not self- sufficient in food- grain production. In the midst of chronic food shortages, the country was compelled to go to war with Pakistan. This is when he coined the iconic battle cry- Jai Jawan, Jai Kisan reminding a struggling nation about its priorities.

For the outstanding slogan given by him during Indo-Pak war of 1965 Ministry of Information and Broadcasting commemorated Shastriji after forty-seven years of his death on his 48th martyr’s day by saying: 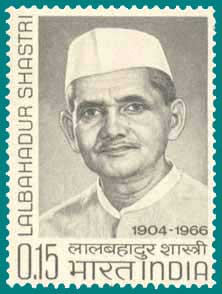 Former Prime Minister Lal Bahadur Shastri was one of those great Indians who has left an indelible impression on our collective life. Shri Lal Bahadur Shastri’s contribution to our public life were unique in that they were made in the closest proximity to the life of the common man in India. Shri Lal Bahadur Shastri was looked upon by Indians as one of their own, one who shared their ideals, hopes and aspirations. His achievements were looked upon not as the isolated achievements of an individual but of our society collectively. Under his leadership India faced and repulsed the Pakistani invasion of 1965. It is not only a matter of pride for the Indian Army but also for every citizen of the country. Shri Lal Bahadur Shastri’s slogan Jai Jawan Jai Kisan reverberates even today through the length and breadth of the country. Underlying this is the inner-most sentiments ‘Jai Hindustan’. The war of 1965 was fought and won for our self-respect and our national prestige. For using our Defence Forces with such admirable skill, the nation remains beholden to Shri Lal Bahadur Shastri. He will be remembered for all times to come for his large-heartedness and public service.

Shastriji was quick and decisive in his actions. A man of staunch principles and a vision that was never clouded by an undue concern for personal popularity, he did not hesitate when tough decisions needed to be taken. With the true courage of a moral man, he neither falter nor backed down once a decision was taken. In this, he had nothing in common with Nehru whose dithering during the ‘62 war with China is well-known.

At the end of the conflict with Pakistan, Shastriji flamboyantly posed for a photograph on top of a captured Patton tank. The hard-working, conscientious, humble man did have a steak of passionate defiance!

Waste no more time arguing about what a good man should be. Be one.

Shastriji‘s died in January 1966 at Tashkent, Russia. His sudden death from cardiac arrest, when he had no history of any heart trouble before, immediately after signing the Tashkent Pact with Pakistan, is mysterious in the extreme. His wife, who accompanied him, was emphatic in her belief that he had been poisoned.

Although Shastriji had been a cabinet minister for many years in the 1950s, he was poor when he died. All he owned at the end was an old car, which he had bought in installments from the government and for which he still owed money. The Servants of India society asked all its members to shun accumulation of private property and remain in public life as servants of people. As a member, and later as President of this society, he faithfully lived the principles which he wore on his sleeve.

There are many who say that had he lived longer, India would have been different. Today, 2nd October, is his birthday- as it is of Mahatma Gandhi. There are enough people to remember Gandhiji; very few remember Shastriji. I remember him from the stories my mother told me of him. Her respect was not easily earned.

He will always be a hero in my eyes.